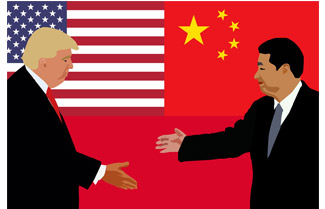 Hogan Gidley, a White House spokesman, said Wednesday that the U.S. government is still looking forward to finalizing the first phase of the trade agreement with China in November. Earlier in the day, the Chilean government announced that it would not host the informal meeting of leaders of the Asia Pacific Economic Cooperation (APEC) scheduled for November this year. Gidley later issued a statement saying that up to now, there is no alternative place for APEC meeting, but "we look forward to finalizing the first phase (content) of the historic trade agreement with China within the same time frame". Previously, US government officials have repeatedly said that the US side hopes to sign the first phase of a trade agreement with China at the APEC meeting scheduled for November. China's economic and trade teams have maintained close communication with China and the United States, and the consultations are progressing smoothly, a spokesman for the Ministry of Commerce said in a statement Wednesday. The two sides will continue to push forward consultations and other work according to the original plan. The leaders of both sides will call again on Friday.

Previous Delong steel, together with China Mobile and Huawei, promotes "5g + Intelligent Manufacturing"
Next Tata Steel will cut 2500 jobs in Europe
Contact Us
Navigation
follow us